The event was born out of the will of Dr. Carlos Martins, president of the Associação Portas do Mar (APM), as a way of publicizing the infrastructure recently created in the center of the capital city of the Azores, Ponta Delgada.

It was in the year 2015 that the first races of Trail Run are organized on the island of São Miguel, although in the Azores some races have been organized on the island of Faial with the Azores Trail Run. The races at this time follow the evolution of the local athletes and are based on distances in the trail category, below the marathon distance.

The geographic potential, beauty, risk and challenges of the island of São Miguel gave the name to this atlantic race, the EPIC Trail Run Azores.

The EPIC has its origin in a partnership between the organizing entity the APM and the Clube Açoriano de Todo o Terreno e Turismo (CATTT) with the support of the Clube Desportivo Metralhas (CDM), which is the result of some organizational experience of other events are responsible for race direction, with Alcino Pires (2015) and Bruno Fernandes (2016 and 2017). In 2018 the technical direction becomes the responsibility of the Clube Morcegos Trail, and the race direction is assumed by Luis Onça.

This edition took place in 2 stages, with a night race on 10 October, the EPIC15, and the main race, EPIC28, on 11 October. The EPIC15 took place in the Forest Park of Pinhal da Paz and surroundings. The EPIC28 departed at Pico da Barrosa and arrived at Portas do Mar. On the 10th october, an EPICtrailTrek was organized, with a circular route, on the Fogo Lagoon railroad in the municipality of Vila Franca do Campo.

This edition had the participation of about 80 athletes. Had as invited athlete the ultra marathonist João Colaço.

For the 2nd edition, the race grew in distance and difficulty. There were 2 races and the EPICtrailTrek. On October 15, the ultra race of the EPIC60 departed from Vila Franca do Campo, next to the Açor Arena pavilion with the main checkpoint set up at the departure point of the EPIC30, the town of Água de Pau. The next day the EPIC caravan joined again in Água de Pau to EPICaminhada (EPICtrailTrek), in a walk of about 10kms with the inauguration of the new trail developed by the Municipal Council of Lagoa.

This edition had the participation of about 80 athletes.

This was the EPIC statement in the national panorama of the sport. As the organization changed the date of the race for December and this month was the date of the final of the Portuguese Cup in the trail distance by the Association of Trail Running Portugal (ATRP), contacts were initiated with the regional government. to bring the best national athletes to the Azores to compete in this 1st edition of the cup final.

It was in this edition that EPIC grew to the 3-digit category to an Ultra Trail Endurance event race, the EPIC100. This race started on December 1st at Lagoa das 7 Cidades at 00h00. For the Portuguese Cup, the EPIC40_ATRP and the EPIC40_Open ( athletes non-finalists in the cup) race, the start was set at Água d'Alto beach in the Pestana Bahia Praia Hotel, in the municipality of Vila Franca do Campo. At 10:30 am, the EPIC15 started at the Cerrado dos Bezerros Forest Park. All the arrivals were concentrated in the idyllic Furnas Lagoon, next to the furnace boilers.

This edition had the participation of about 500 athletes and had as invited athlete the international Salomon athlete Armando Teixeira.

The 2018 edition, unlike the previous edition, was marked by a 180º in the course definition, starting at Vila do Nordeste from East to West towards Açor Arena Sport Center at Vila Franca do Campo.

The weather conditions that were felt on the day of the race were excellent, which allowed the athletes to enjoy all the surroundings and the stunning landscapes of the island of São Miguel. recorded in memory were the race starts of the EPIC120 in Vila do Nordeste, the human frame of the EPIC30 and EPIC15 start at Agua de Pau village, the sunrise in the Salto da Inglesa and PAC6 - Castelo Branco and also the endless views of the island from Pico da Barrosa (peak).

For future memory stands the regist of 15h12 made by Bruno Dantas, an athlete from Madeira island in the EPIC120.

In this edition the event organization continued the work of last edition. The courses were maintained, with the exception of the queen event which went from 120 to 110 km, with minor changes in the other events and the event's base was now entirely in the Açor Arena pavilion in Vila Franca do Campo.

In this edition the number of registered athletes exceeded all the best expectations, 709 registrations were registered, with 86 foreign athletes of 21 nationalities. 118 athletes in EPIC110, 113 in EPIC60, 230 for EPIC30 and 248 in EPIC15.

Highlight at EPIC110 for the victory of Frenchman Patrick Bohard of Team Hoka France with 12h56min and the renewal of the title for local athlete Vera Oliveira from CD Metralhas. In EPIC60 the victory went to the Spanish Basque athlete, Zigor Iturrieta with 06h16min and the French athlete Manon Bohard 3rd of the general classification. For EPIC30, the winners were Helder Pereira and Joana Esperançaso and in EPIC15, the Spanish Nicolás Garrido and Célia Neto. 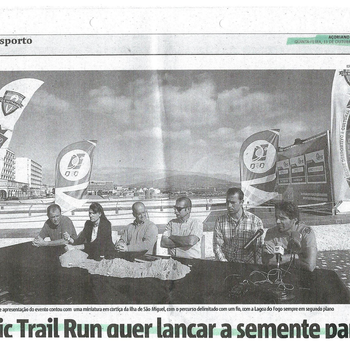 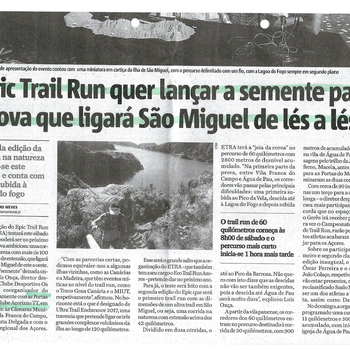 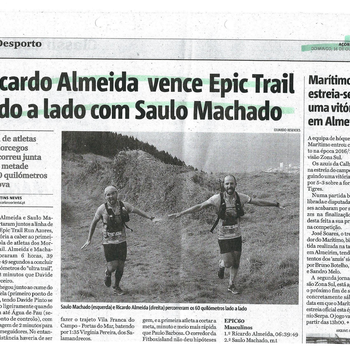 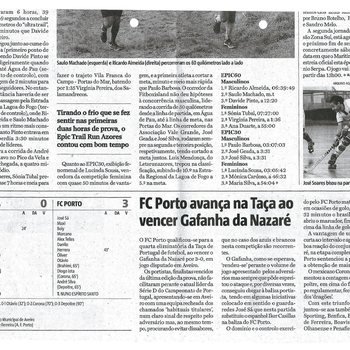 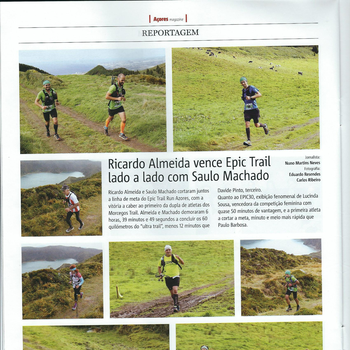 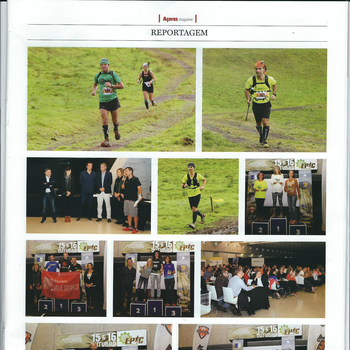 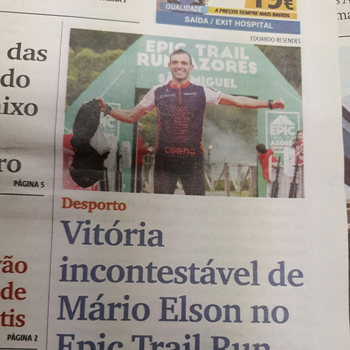 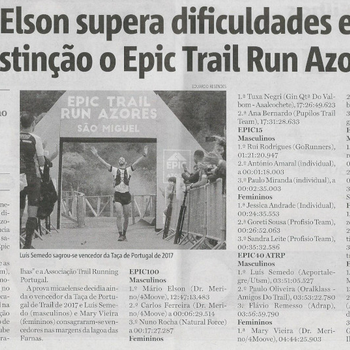 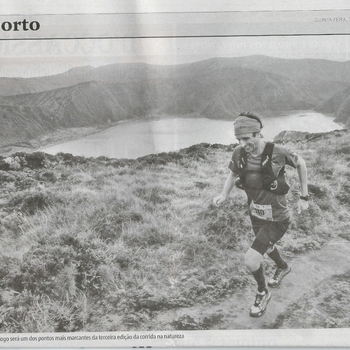 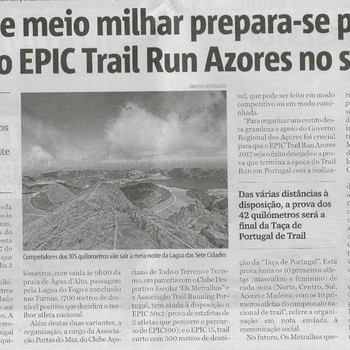 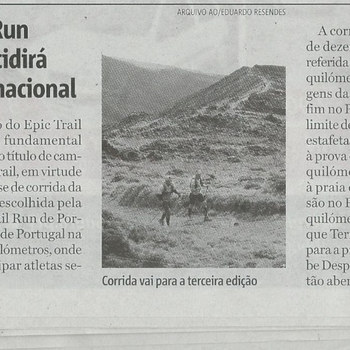 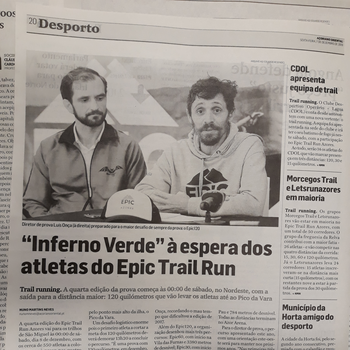 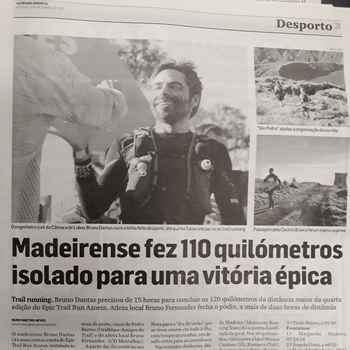 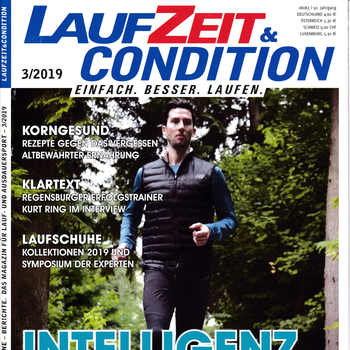 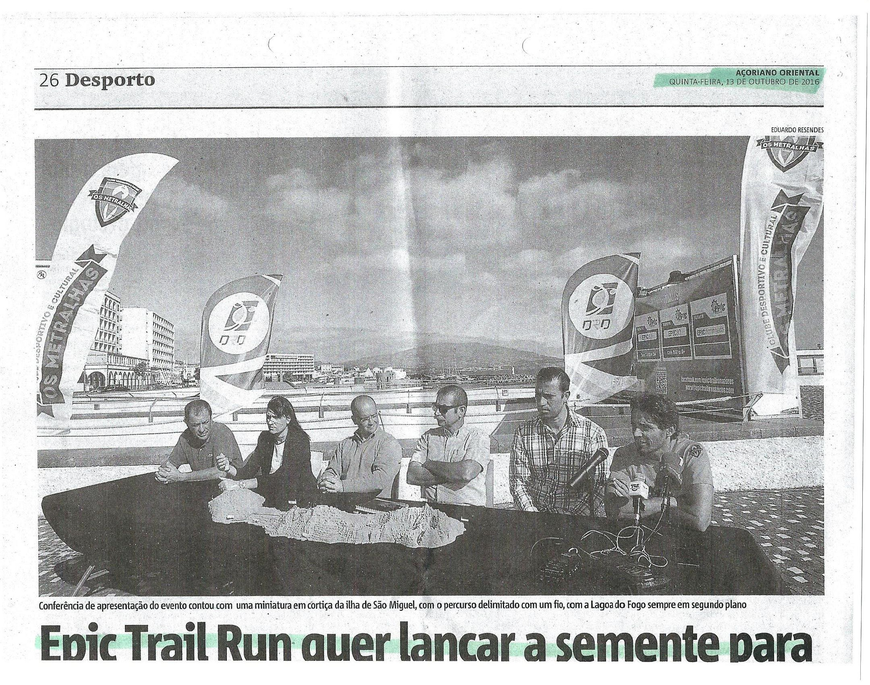 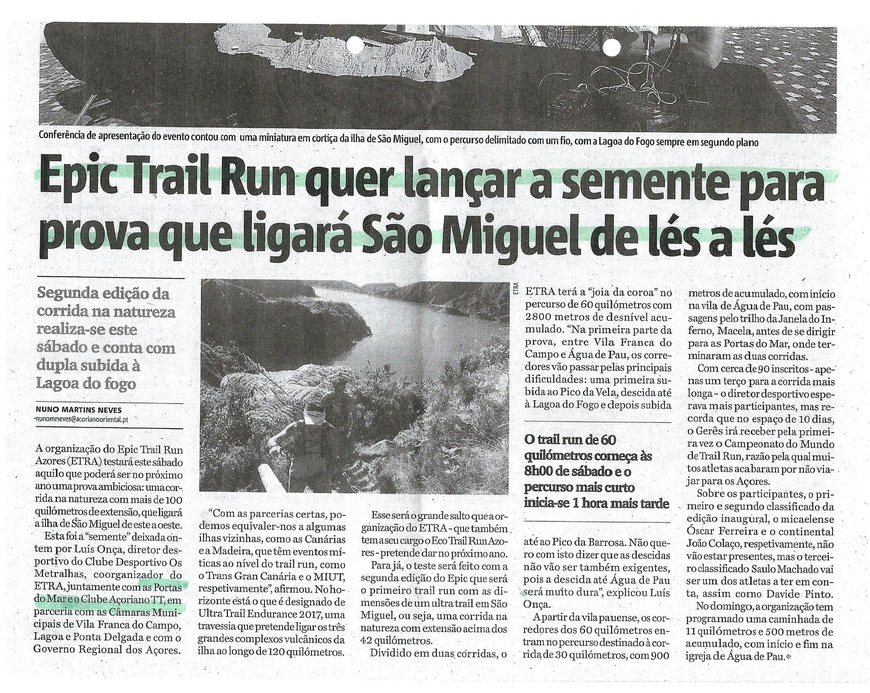 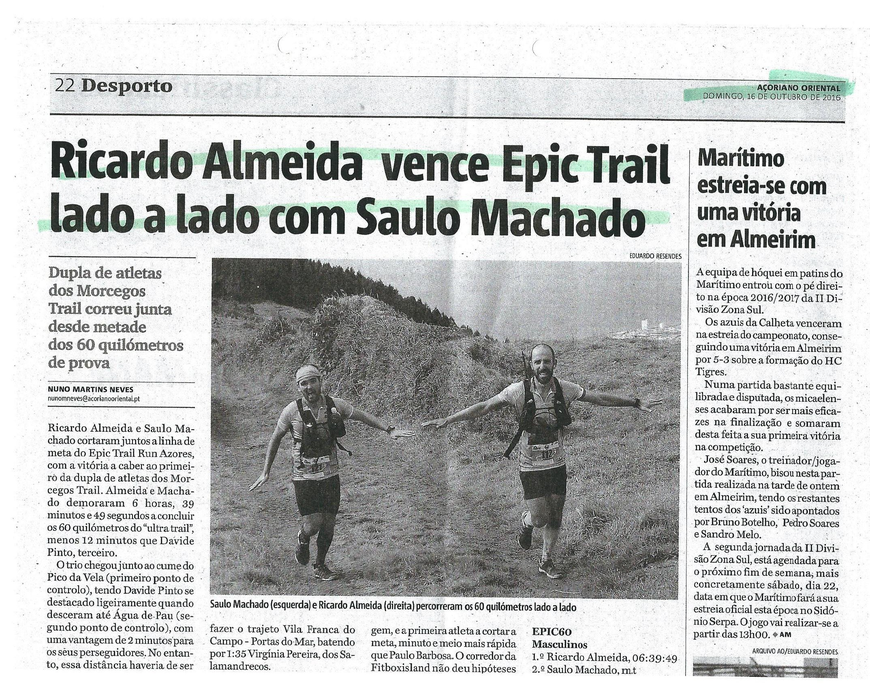 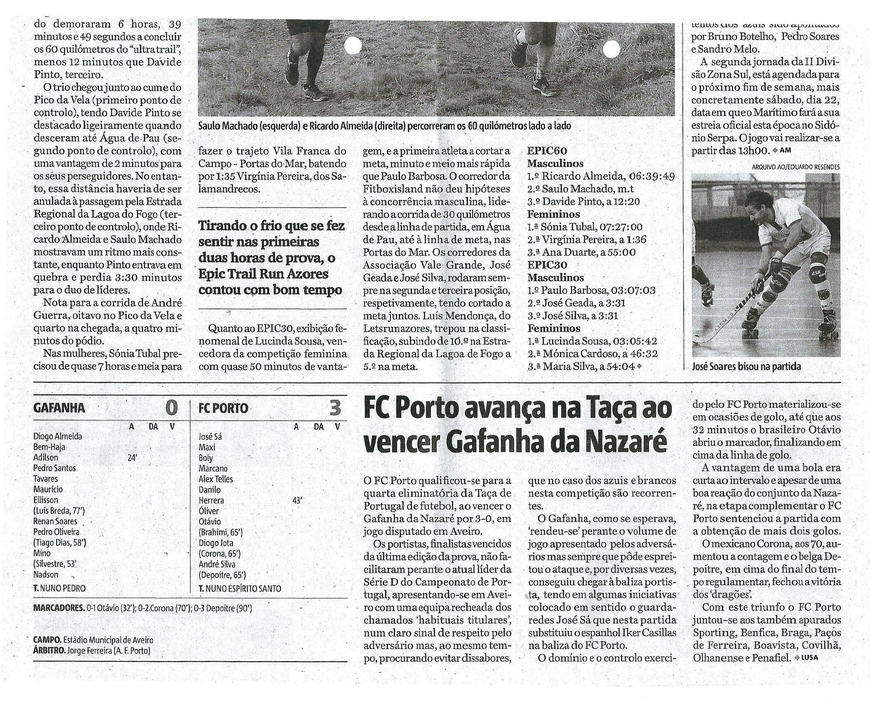 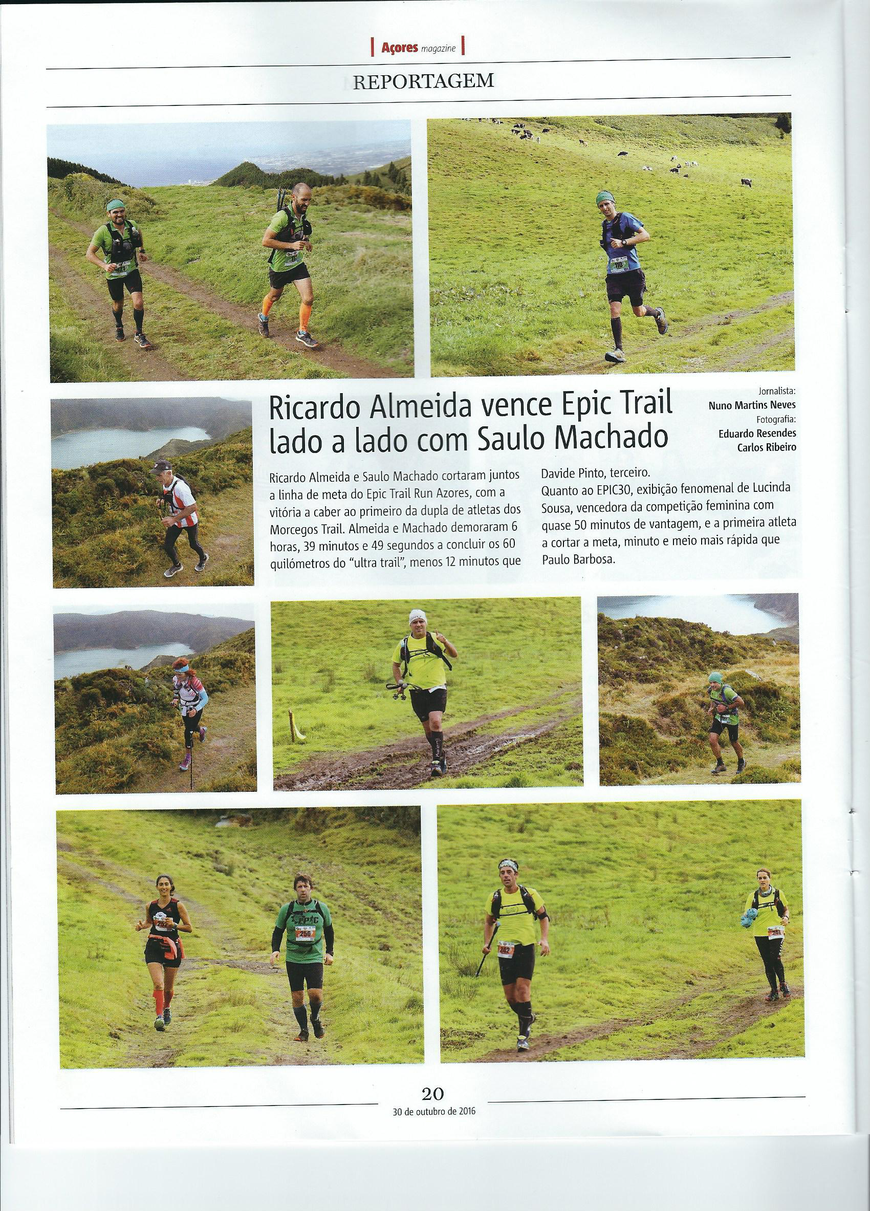 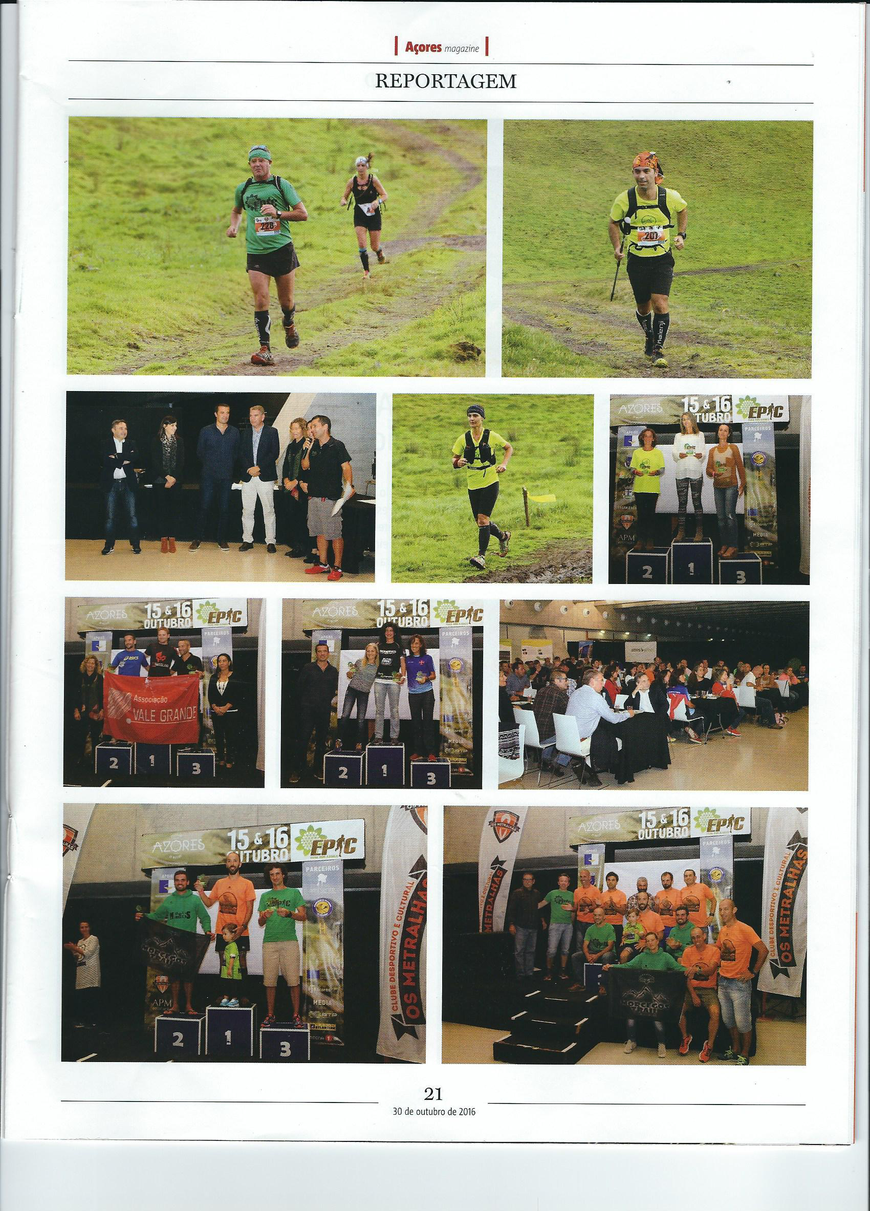 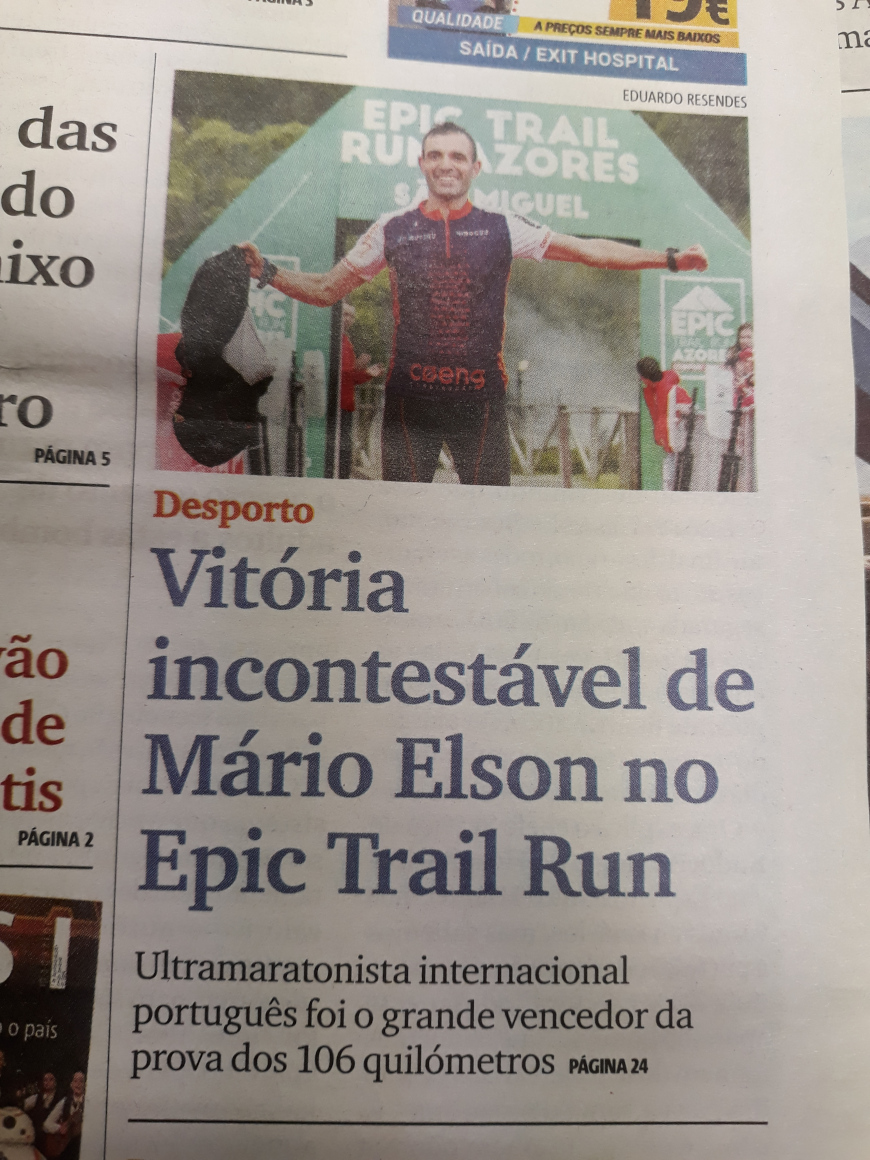 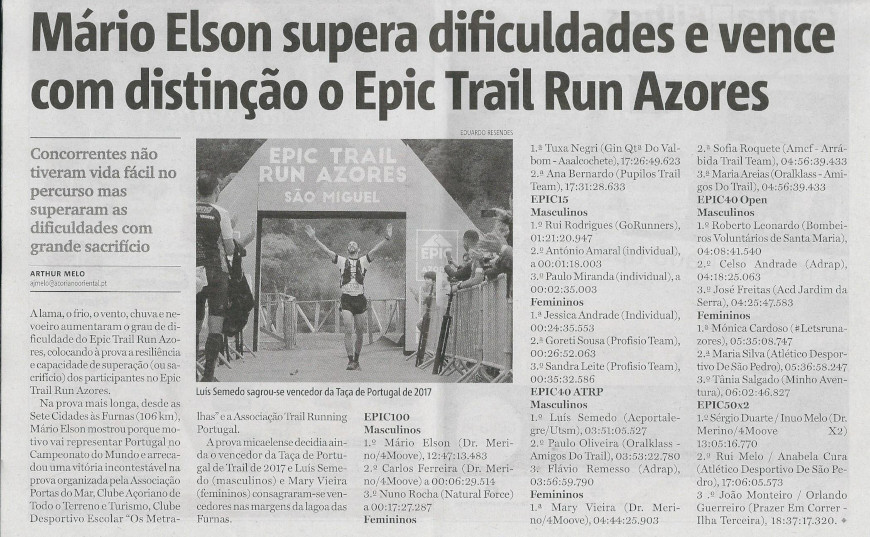 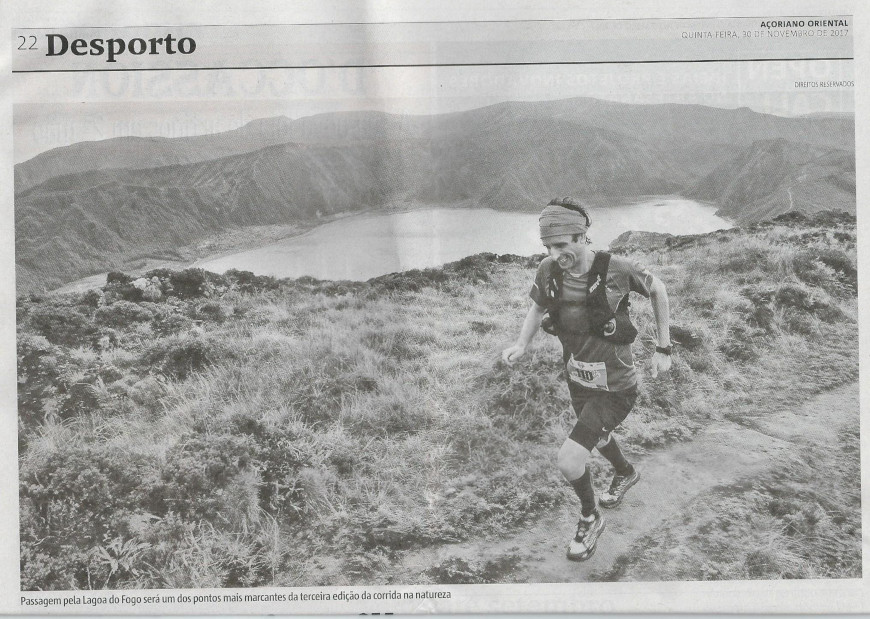 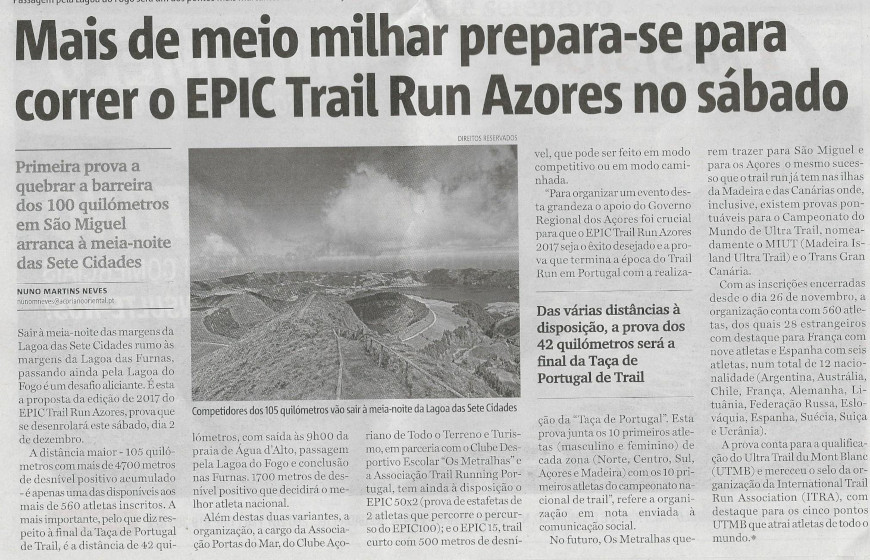 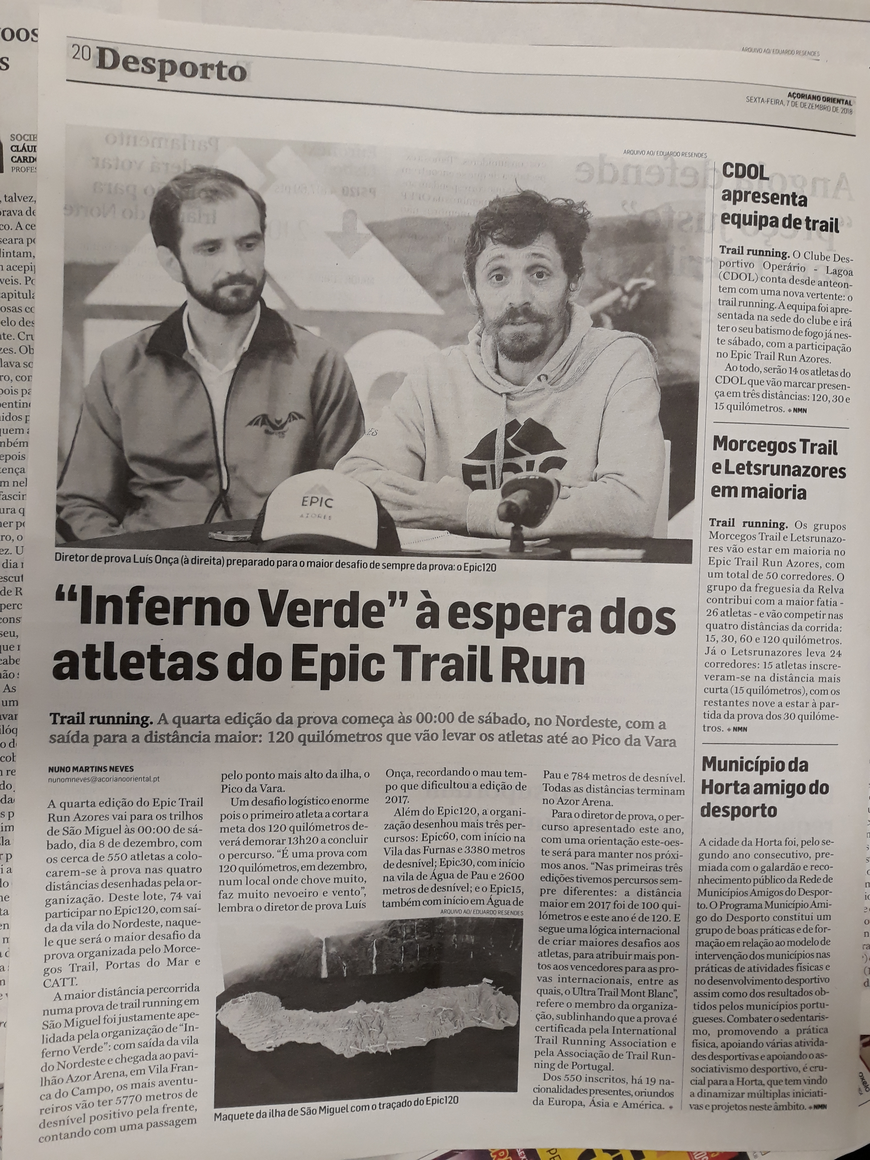 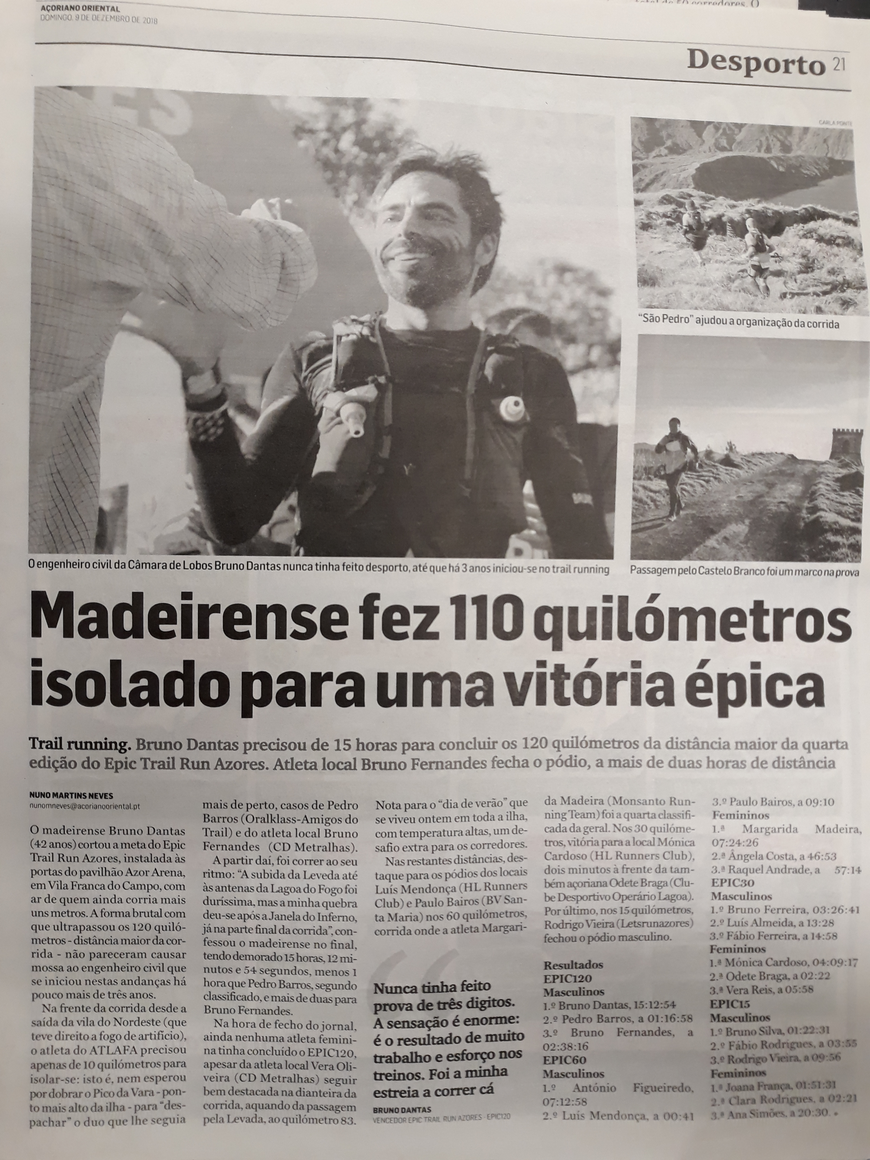 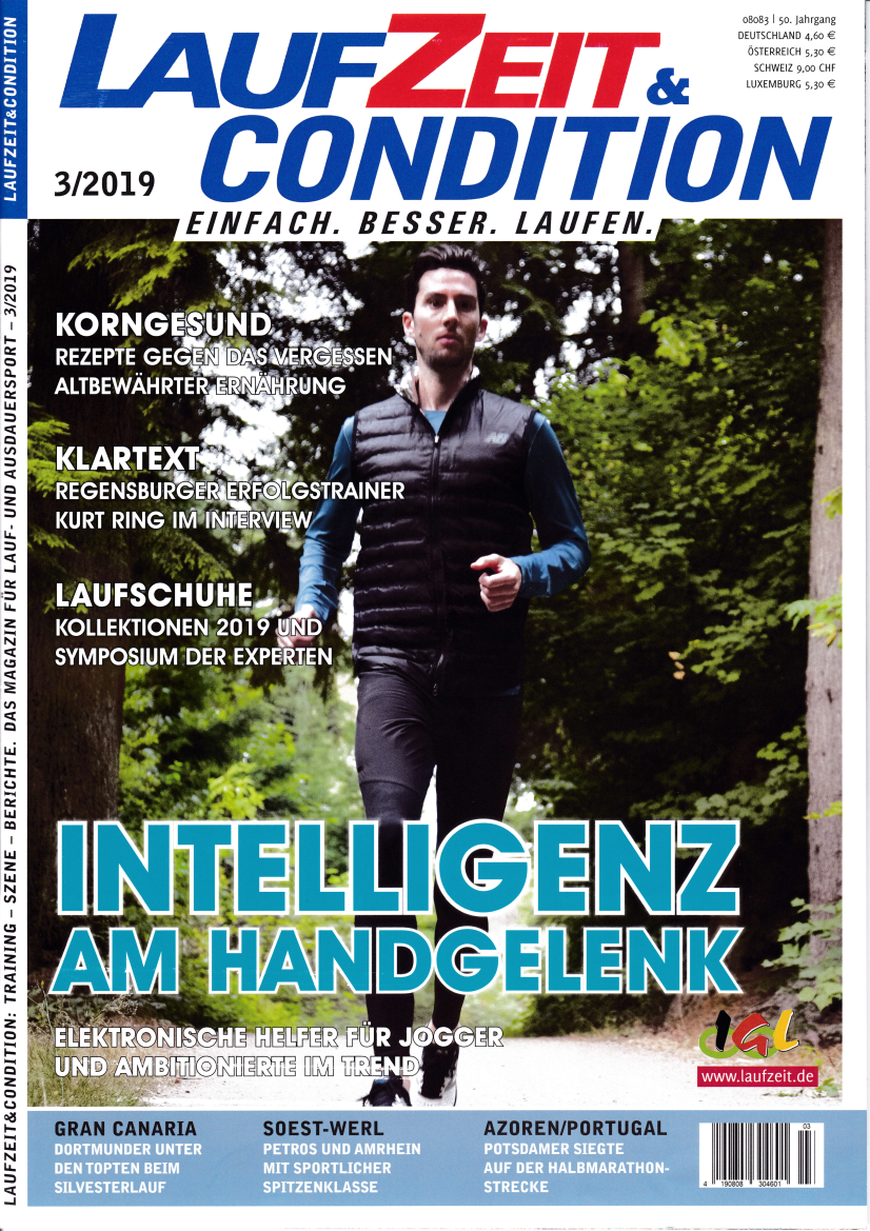